During work in office rooms, the office environment produces both avoidable and unavoidable impairments to humans. Some problems caused by the environment are unavoidable if a certain kind of interaction between users is warranted, e.g. noise in shared rooms generated by the colleagues. However, others such as machine noise can be avoided at least to a certain degree. Both artificial lighting  and daylighting may cause impairments in office environments. The question is whether they are relevant in comparison to other environmental factors and whether research can indicate how possible impairments can be avoided.
The research work reported here has demonstrated that daylight has a positive impact on health and well-being of the workers and artificial lighting a negative impact in general. The degree of the negative outcomes depends on the type of lighting with overhead lighting being the worst and two-component lighting being the best. Where workers are forced to work with task lights alone they tend to appreciate their table lamps, however, the health impairments caused by artificial lighting are stronger than with any other type of lighting.

During work in office rooms, the office environment produces both avoidable and unavoidable impairments to humans. Room temperature in shared work-areas, for example, numbers among the unavoidable impairments, partly because every individual prefers a slightly different temperature, thus making it impossible to strive for the most comfortable temperature for every single person; rather, one can only settle on an “optimal” temperature, i.e. the temperature which is comfortable for the majority of the workers. Since this optimal temperature is in average approximately 2°C higher for women than for men, there are constant conflicts in shared work-areas. Yet, given the fact that there are a number of good reasons for working in shared work-areas, one is forced to live with this impairment. Conversations among others in the same room, which form an integral part of working and living together, provide a similarly problematic source of impairment.

On the other hand, impairments due to machine or traffic noise for example, can be avoided, although it may not be possible to take the relevant measures in every case. An excessive influx of daylight at workplaces – especially VDT-workstations – in the proximity of a window, for instance, would also number among the avoidable sources of impairment. However, as the data concerning working conditions have shown, one is either forced or willing, to put up with these impairments.

In the framework of this project, an effort was made to ask questions relevant to the most important avoidable and unavoidable stressors causing impairments to the subjects, and to compare them with potential impairments through lighting conditions. Fig. 1 shows the corresponding section of the questionnaire. 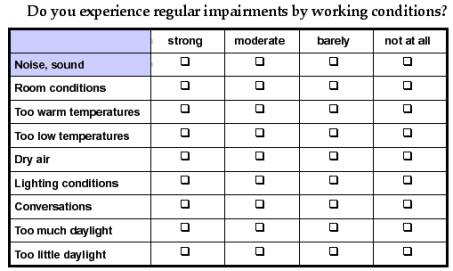 Fig. 2. Sources of regular impairments and percentages of persons who feel moderately to strongly impaired

Comparison of Impairments Due to Lighting and to Other Stressors

Fig. 2 shows the result of this section of the questionnaire, Fig. 3 represents the percentage of persons who feel moderately to strongly impaired. It shows that lighting belongs to the strongest impairing factors in the office environment, along with noise and dry air; even such stressors as conversations, temperatures which are either too high or too low, or room conditions are not responsible for the same amount of stress as lighting conditions. By contrast, too much daylight represents the least important form of stress. What this means, however, is that the negative assessment of lighting is in fact based on regular human impairments due to artificial lighting. A stepwise regression calculated with the nine variables shown in Fig. 1 as independent variables, and with health data, show that the “lighting” variable is responsible for the biggest proportion of variance in almost all cases, e.g. for 50% of common variance for the variable “premature fatigue”. Noise and conversations as impairing factors only affect variables such as “poor concentration” or “irritability”. This finding corresponds well with the results of physical measurements in phases 1 and 3 of the project which show that the overall noise level in offices has declined during the last decade by almost 10 dB(A).

Influence of Equipment and Room

The above-mentioned influence of lighting conditions does not necessarily stem exclusively from the lighting installation itself. It is at least likely that it is also produced by the equipment used. If we assume such an influence, its source can lie in the office equipment, e.g. VDTs and typewriters. For example, under specific conditions one can demonstrate that it is not the lighting itself which causes dissatisfaction with the lighting, but rather glossy keyboards.

The analysis of the data established in this project has shown that the most important influence is constituted by the size, and specifically by the depth of the rooms: the larger and deeper a room, the greater the impairment. As shown in Fig. 4, the influence is a function of room depth; as the latter increases, so does the number of complications. The trend illustrated in Fig. 4 does not differ for users of desks on the one hand and for the users of VDTs on the other, i.e. the disturbance due to daylight in work with VDTs that is postulated in the standards is not experienced as such by the workers.

Fig. 5. Influence of the type of (artificial) lighting on the percentage of moderately to strongly disturbed persons

Artificial lighting, which is intended to replace daylight in rooms of great depth, can at best produce the desired brightness, as can be seen in the affirmative answers to the corresponding question: 90% of those asked feel the lighting to be “bright”. Such lighting fails, however, as far as the promotion of well-being is concerned. Artificial lighting tends to be considered as an impairment.

Influence of Type of Lighting

In this section, the validity of the above statement is tested for the different types of lighting taken into account. This was achieved by means of an analysis of variance which tested whether a significant difference can be established. Fig. 5 shows the result. The difference is both statistically significant and relevant.

In order to be able to answer the question concerning the possible influence of equipment, we compared the impairments of persons working at conventional desks, VDT-workplaces, and typewriters. For this purpose, a parametric test (variance analysis) was calculated, the result of which is shown in Fig. 6. Accordingly, lighting with a table lamp only is significantly worse for work at a conventional workplace than are the two other forms of lighting, which in turn differed slightly from one another. For work at a VDT-workstation, 2C-lighting is by far the best type of lighting, whereas overhead lighting is the most unfavorable type for this kind of work. Desk lighting is the most unfavorable type of lighting for work with a typewriter, where 2C-lighting is best.

Fig. 6. Level of impairment resulting from different types of lighting at the conventional desk, the VDT-workstation, and at the typewriter desk. 2C lighting constitutes the most favorable type in all three cases.

The analysis of impairments shows that artificial lighting is not only judged to be uncomfortable, but is also felt to constitute an impairing working condition, comparable to other impairments such as dry air or noise. The degree to which this assessment is in fact valid depends on both the type of the room and of the lighting.

The demonstrated influence of room depth shows that impairment increases according to the degree to which the worker depends on artificial lighting for the completion of the work tasks. Those who have both a desk lamp and overhead lighting (2C) feel least impaired. Among other things, this lower level of impairment is presumably caused by the freedom to use either or both of the lighting components. Effective personal control of the utilization of lighting seems to be the most important factor. Although this result is hardly surprising for anyone who is really in control of his or her immediate environment, it seems to be a new idea in industrial work areas after almost 80 years of ongoing systematic efforts to put the control of the working environments into the hands of experts and machinery.

The overall result that lighting conditions constitute a source of regular impairments for 57% of office users should give some food for thought for those responsible. Even today, seven years after the first publication of this figure and an analysis of possible reasons of the malaise, many lighting experts are still reluctant to accept that there may be “a problem”. Seven years is long enough either to accept unpleasant findings or to prove the opposite. The response of user organizations and users was very different to that of lighting experts and very positive.

We emphasize that the figure 57% regularly impaired office workers in Germany indicates that a higher proportion of other workers may suffer from the lighting of their workplace since the lighting of offices takes more benefit of existing regulations in general, and companies spend more time and money per unit on office workplaces than on others.